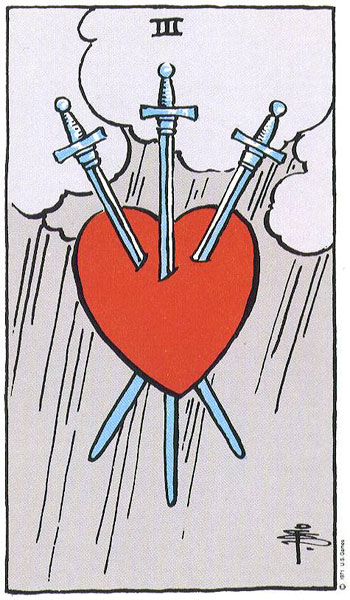 This card shows a heart pierced by three swords. Although the traditional interpretation is heartbreak and betrayal, 3 energy can also manifest as indecision and worry, as if your heart were being pulled in many directions, and the angst that results from being ‘torn’. It sometimes arrives when we are trying to make a difficult decision about something, and feel heartbroken or stuck in making the decision.

This card also has ‘3rd Wheel’ energy, in the sense that there may be some excessive component to something that does not belong, but which you’re having a hard time letting go of. This card can also be an indicator that there is some sadness in a situation that has developed, but which needs acknowledgement now. It may be difficult to face whatever difficulty exists, but by facing it and accepting it, with whatever grief may accompany it, we allow ourselves to move on.