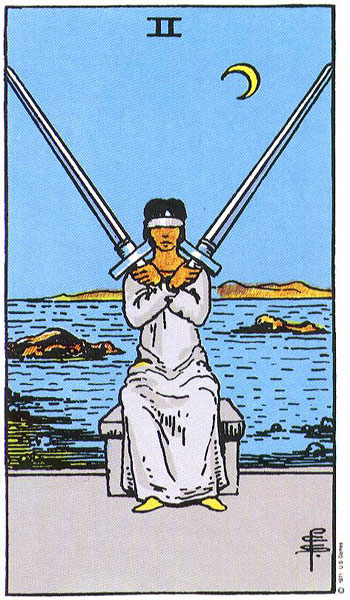 This card shows a blindfolded woman seated with two swords crossed in front of her. She cannot see anything in front of her, and remains immovable. It is a card of ‘stasis’, on its way to ‘stagnant’. When we refuse to make a decision about something, refuse to look at the facts, want things to remain the same, and cut ourselves off from input from others (or even ourselves), it has 2 of Swords energy to it.

This card can appear when we are refusing to see the options in front of us, refusing to make a decision or even acknowledge a decision, cutting ourselves off from the outside world, or in any way being ‘willfully blind’. In the picture, the woman has the opportunity for forward motion by putting down one of the swords (making a decision), and standing up. Until then, she remains seated and ‘of two minds’, effectively self-blinded and checked out.

Birthday today? Click on the card to learn more about your Birth Card.